Sam Perry - a dear friend of mine and Loyola Academy student - has signed on to EP (Executive Producer)  our new film under the working-title of "Duel Romance." She has also agreed to play the supporting role of Leighton, the regular actress of my films who was denied the lead role in the new film (in the new film). Her character will also be seen in Lane J. Lubell's character's previous films, both of which opposite Tom.

I - Lane J. Lubell - will write & direct. Other actors of the film include Lubell (me) in the lead role as Will Simmers. As well as I am currently in negotiations with James Garlin (son of Jeff Garlin (Daddy Day Care, Curb Your Enthusiasm)) for the integral role of Tom - my acting regular who becomes in tangled in a complicated web of love. I am currently scouting/casting the role of Emily, the female lead.
Posted by Larry at 8:57 PM 0 comments

All principle filming has concluded. I have taken a small break to wind up school projects as well as study for finals.

I will finish with a few critical "Voice Overs" and continue editing. The plan is to have the film ready to submit to the Chicago Horror Film Festival.

Due to the longer length of this film, I'm not sure if I will be able to post it to YouTube. If not I will have to find other options. 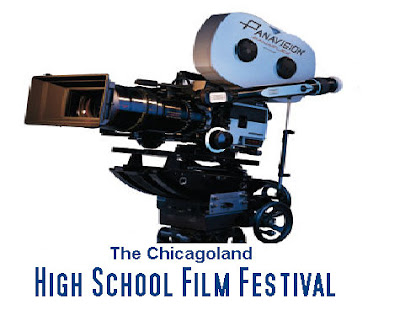 OK, granted it's a far cry from Cannes Film Festival.
No Bob and Harvey Weinstein are not going to be in the audience looking
for the next film for Miramax to distribute. But that does not stop me from being a proud father and being happy to see that Lane's newest film made the finals.

Is the actual name for the larger film that is still in production.
He still has additional footage to be shot, followed by a long process of voice overs, color correction, Sound editing, cutting and even CG effects.
What he submitted was in truth a segment of his larger work. The complete film would greatly exceed the 10 Minute time limit, and there is some language and subject matter that would not "Clear the censors" at an event for Chicagoland High Schools.
The Chicagoland High School Film Festival.
Friday from 6:00 pm - 9:00 pm at Latin School auditorium