Hand Springs: In the can

Principle Photography has been completed and all 3 SD cards have been uploaded, and backed up onto two external drives. I have also uploaded all of the audio files off the Tascam, and yes, backed those up as well. When dealing with computer files there is almost no way to be over-careful. this I learned one morning when I woke-up, came down stairs only to find that as we slept, some criminal entered our home, grabbed two Mac Book Pros, my mom's purse, and assortment of other items, then used our Audi as their "Get-a-way car." Insurance paid for things that were lost, but my Mac Book had my 98% completed movie "Project Shoeshine," all 380Gigs and over 1,000 hours of work. Thanks to back-ups, I was able to retrieve all of the data.


After a careful check of every clip, and assembling a ruff cut, I found a few "B" roll images that I wanted to re shoot. Two involved exterior shots of the car driving down streets needed to make room for the length of the voice-over dialogue; so once again I had to get the car washed to keep continuity. The car wash had a long line, I'm rather patient except when I'm counting down hours of remaining light, especially when I know this will be the last weekend before the leaves change. I'm happy to say I got the final outdoor footage done in time to keep the lighting consistent.
Posted by Larry at 5:14 PM 0 comments

The first day of shooting is always both exciting as well as a bit scary. All of the writing, planing and preparation all have lead up to the moment when I call action and performances are captured. I am fortunate to have talented friends that are kind enough to volunteer large quantities of their time. Of course even with that generosity, I am still pressed for time, and with out a real crew to expedite matters.
Maybe this would seem obvious to many, but I must admit I was a bit surprised, when I went out the night before a shoot, when I found the Candy Canes are not readily for sale in the first week of September.


Here are a few stills from the shoot.

It looks like our cast is: Riley Nelson: Jack Erika K. Marks: Meg Cullen Welch (Meursault Poiccard on facebook for some reason): Scott We'll be filming on 2 of the of the following days in August: 18, 21, 24, and 25. The only exception to this may be stealing Riley after rehearsal some day that week to film him walking home as it takes place later in the day, which is unlikely to happen.
Posted by Larry at 4:44 PM 0 comments

Caroline Chu: This is really dramatic-looking June 29 at 3:03pm via mobile 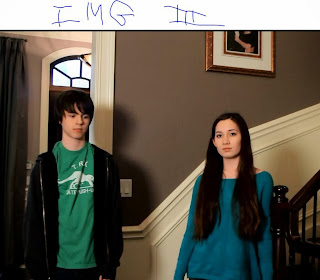 Lane J. Lubell Indeed, it is. That said, these still have to be color corrected, so a lot of those shadows won't seem QUITE that soap-opera-like, but it's supposed to be dramatic

Here is a Video made for the band The Headhunters.

Shooting is underway for "Returning Home"

I'm happy to say we have 85% of the film shot, and I really want to thank everyone for being
so patient when I know how much crap school is piling on us this time of year.