This was the second, and final shoot day in Highland Park. Since we had Dakota barking when the doorbell was rung, I've added the dog into the script, this is the second time I've added a dog belonging the family that was nice enough to let me film in their house, in this case my Aunt and uncle.

I got my dad up just before 7:00am, Jack got to the house a few minutes later, we picked up Cat at her house, by the time I dropped off Cat it was after 1:00am. That's a long day, in fact it's almost two long days, but the whole cast hung in there.

Dwight traveled a long way, and still was 20 minutes early, Cat wasn't feeling well, everyone moved around schedules and woke-up, on a summer day, hours earlier than required for school - I promise, the dedication did not go unnoticed.  I want to thank Heidi and Jimmy for letting us use their house, unable to make a sound in their own home. I'm glad about them not freaking out over the stage blood, and for cast members kind enough to clean it up. (The shower really looked like a crime scene. and we were not even filming in the shower.) 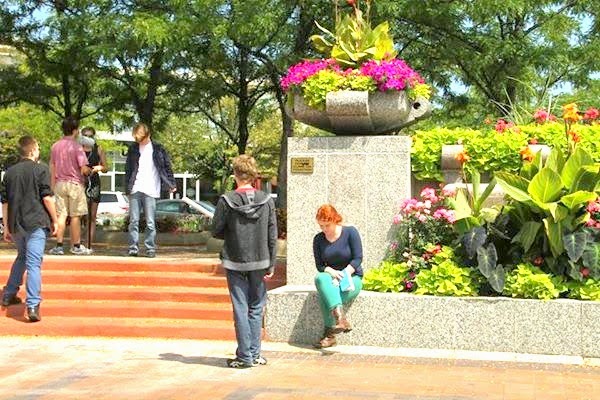 We went out to this small outdoor mall in Highland Park to shoot the scene with the heroic trio of Scoobies. I was worried about getting this one done because it's shot  in one long take and in a populated place without a permit; so I suspected this will be tricky. I had a fear that we would get kicked out of the place, but it turned out the business were cool about us being there. We ran into another small problem, four annoying 12 year-olds with skateboards- very loud skateboards. Erika asked them nicely, I didn't think any boy would say no to her, but I was wrong.  Cat asked nicely, then hinted there could be some potential pain to them if they did not keep quite for a few minutes, I think that got their attention and they moved along.

We had a lot to shoot today and for some unknown reason, the pressure resulted in the cast periodically breaking-out into singing extended passages from various musicals- what can I say, this is sort of a unique group.